Facebook Can Project Your Eyes Onto a VR Headset 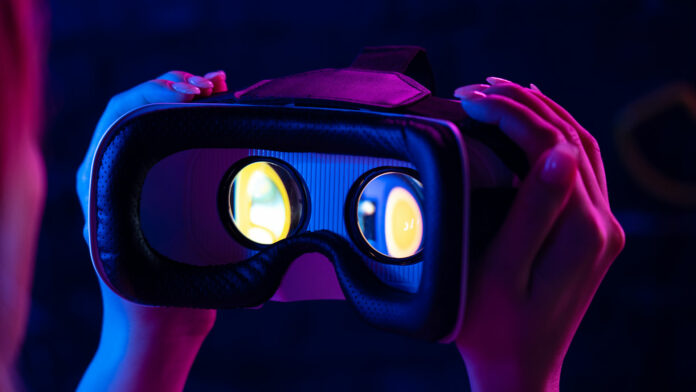 Virtual reality is an immersive and captivating experience, for the user that is. For spectators, the experience can be just as enjoyable. Facebook Reality Labs want to extend on that and make VR headsets less physically isolating by helping people to see your eyes while you’re in virtual reality.

Although still firmly experimental, researchers have devised a method for translating your face onto the front of a headset – unsettling? We’ll let you figure that out for yourself with the image below.

What is Passthrough VR?

Passthrough VR is a feature that displays a live video feed, using headset cameras that enables users to see the real world while they’re wearing the headset. With regards to Facebook’s Oculus Quest platform, it shows users a passthrough feed when they step out from their VR space’s boundaries. However, people wearing a headset obviously can’t make eye contact – for onlookers, this can be quite awkward (or comical).

Nathan Matsuda, a Facebook Reality Labs scientist decided to try his hand at changing this by mounting a 3D display onto an Oculus Rift S headset. The result? A virtual rendering of his upper face with custom-rigged eye-tracking cameras that captured where the wearer was looking so his avatars eyes could point in the same direction.

“My first reaction was that it was kind of a goofy idea, a novelty at best, but I don’t tell researchers what to do, because you don’t get innovation without freedom to try new things.” – FRL chief scientist, Michael Abrash.

With leading a team in developing a svelter design, Nathan ran with the idea and revealed the team’s porotype headset that adds a stack of lenses and cameras to a standard VR headset. The cameras capture a photo of the person’s face and eyes inside the headset, with their motion being mapped onto a digital model of the face. From there, the image is projected into an outward-facing light filled display.

The end result? A pair of octagonal goggles that evoke a rather unsettling feeling.